After The Hotel Assassination Franklin is told by Lester that his portfolio was getting a "little successful", so he figured tangible assets would be the best investment, but someone would need to live there for "tax purposes" so Franklin was chosen, to his relief as it meant he would no longer need to live with his aunt Denise. 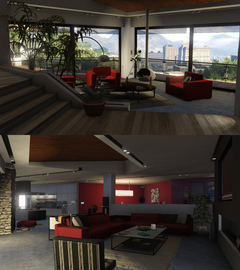 The property is a modern house in Vinewood Hills with two floors, a garage, and an infinity pool and Jacuzzi. In the driveway, Franklin's Personal Vehicles are parked adjacent to the road. A large living area with a kitchen to the west and stairs to the bedroom to the east. The kitchen has a counter and an adjacent island, and a door is permanently open that leads to the deck. Outside, the deck, garage, and backyard are all connected at a staircase to the left. Downstairs, the bedroom is connected to a hall with three other inaccessible rooms. A walk-in closet is accessible in the bedroom. A door to the backyard is permanently open after the Hotel Assassination. The residence is decorated with abstract art and characterized by modernist architecture.

View inside before house is unlocked for Franklin.

View inside before house is unlocked for Franklin.

Franklin moving in to bedroom.

View of the house from the terrace.

Franklin on the balcony with Chop in the background.

The replica of the house (seen in the foreground) in Lake Vinewood Estates.

Northern Richman replica.
Add a photo to this gallery

Retrieved from "https://gta.fandom.com/wiki/3671_Whispymound_Drive?oldid=1302069"
Community content is available under CC-BY-SA unless otherwise noted.