"The most convenient store in America. Always open. Always over priced!"

“Where else are you going to buy a six-pack, condoms, and cigarettes when you're high at three in the morning?”
— Slogan in GTA IV

In Grand Theft Auto: Vice City and Manhunt, 24/7 stores double as the "Calleggi Delicatessen Restaurant". A sign reading "24 (Squirt) 7" ("24 (Sprunk) 7" in Manhunt) can be found hung alongside the restaurant signs.

24/7 stores are well spread all over San Andreas. While nearly all 24/7 outlets tend to have distinctive exteriors, even disguising themselves under another name (i.e. Roboi's Food Mart, P Hat Liquor and the 69¢ Store), all 24/7 branches tend to share similar interiors, which feature a combination of store shelves that cycle with each visit; originally, it was possible to rob 24/7 stores, but this feature was removed in the final version of the game. Unlike other businesses in the game, 24/7 stores are not marked on the game's map or radar.

The 24-7 logo in GTA San Andreas is similar to 7-Eleven's logo. The only differences are the words in the logo, and that the foreground and background words' shades of color are inverted; the real 7-Eleven logo also has a slightly darker shade of green in the background. Textures name for 24-7 outlets also incorporate "7_11" or "711"; The interior logo of 24/7 is different, and is colored yellow and blue, perhaps being a beta design of the logo. These design traits were partially abandoned from GTA IV onward, featuring a unique and more retro-like design, as well as the addition of the color yellow into the logo.

Despite being common and featuring interiors, the stores have limited interactivity; other than providing the ability to purchase food or drinks from vending machines, the 24/7 stores serve no storyline related or 100% completion purpose in GTA San Andreas.

24/7 stores are also featured in GTA IV and GTA Chinatown Wars, but are not available for interaction. Billboards advertising the store and its products can be seen, and the logo appears on some Steed (GTA IV) and Yankee (GTA Chinatown Wars) trucks. In GTA IV, they are one of the official sponsors of the CNT program I'm Rich.

A closed down 24 hour Mini Mart can be found in Schottler named as Twenty Four Seven, featuring the same color scheme as 24/7, with some colored letters missing and one letter turned upside down, making it read "Twat FurS", another example of Rockstar's numerous sexual innuendos.

The brand reappears in Grand Theft Auto V and Grand Theft Auto Online, often near gas stations. However, not all 24/7 stores can be entered. The player can buy three types of confectionery: (Ego Chaser, P's & Q's and Meteorite) to restore the player's health at the shop counter, or use the ECola and Sprunk machines located next to the counter. The player is able to shoplift their product of choice, resulting in a one-star wanted level.

In Grand Theft Auto Online, snacks, drinks and cigarettes purchased from 24/7s are added to the player's inventory rather than immediately consumed, allowing the player to use them at a later time.

In Grand Theft Auto V and Grand Theft Auto Online, some 24/7s can also be robbed for money. The player has to threaten the shopkeeper by pointing a weapon at him. The player can intimidate the shopkeeper by aiming a gun at his head, forcing him to empty the till faster. This can also be done by shooting at the products behind the counter, or, in GTA Online, speaking into (or generating other noise toward) the mic. The cash registers can also be shot directly to release the money inside.

If by any chance, the player enters any convenience store and there is no clerk, the player can shoot both tills, take the money and will not get any wanted level.

In GTA San Andreas, 24/7 stores use a total of three different interiors internally named "X7_11S", "X711S2" and "X7_11B". X7_11S and X7_11B, which are used for all but one 24/7 store, occupy a smaller area and features the aforementioned vending machines and arcade games. However, X711S2, which is linked to the west Mulholland, Los Santos outlet, features a moderately deep interior but has no vending machine or arcade cabinet, rendering that outlet useless in gameplay.

The interiors tend to feature a clerk manning the stores' counter, while two to four pedestrians (or customers) are usually found roaming the aisles, uttering unique shopping-related lines, as well as performing animated sequences where they retrieve items from store shelves and interacting with the player only if provoked. Customers may also interact with the store clerk in a short animation, but the customers never leave the store. The store shelves are also fairly detailed, featuring various branded products like Love Juice, Cherry Popper ice-cream or pizzas from Vice City.

Bottles and cartons of milk.

Cans of Sprunk, and "Sprunk Lite".

Bottles of Old Pissh Draft, and an unnamed liquor. 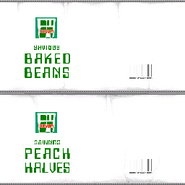 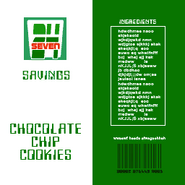 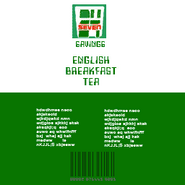 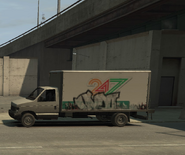 Michael outside of a 24/7 store in Little Seoul.

Shelves stacked with bottles and other stuff in 24/7 convenience store.

A view of 24/7 convenience store interior having a Sludgie machine.

The chilled zone section of store having freezers.

A green highlighter and a stapler as seen on counter of 24/7 convenience store.

A cash register on the counter of 24/7 convenience store. 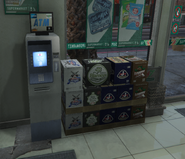 An ATM and beer boxes kept in the store.

Mutliple 24/7 store shopping baskets kept at entrance of the store.

Another angle of the staff room.

Lax to the Max.