Standard White - 100%
“The Karin 190z changed the world. If European marques harbored any residual sense of innate superiority, this is the car that crushed it utterly and forever. More elegant than the most refined Grotti, classier then the suavest Ocelot, as perfectly engineered as any Pfister, the 190z was a cup of piping hot sake in the face of fifty years of complacency.”
— Legendary Motorsport description.

The Karin 190z is a classic sports car featured in Grand Theft Auto Online as part of the The Doomsday Heist update, released on February 20th, 2018, during the GTA Online Bonuses event.

The 190z is a dual combination of the Datsun 240Z/Nissan Fairlady Z/Nissan S30 and Toyota 2000GT. The side profile and front fascia takes influences from the Nissan; the roof, greenhouse, wood grain interior and rear fascia are derived from the Toyota. The tail lights, as well as the rear bumper, seem to be borrowed from the Ferrari Dino 246 GT.

The vehicle assumes a traditional profile and a long body, where the front end features a small plastic bumper spanning the whole width of the car, as well as the grille behind it. The outer edges of the car have inset sections holding the large circular headlamps, while the centre features a long bonnet that hinges from the front, covering the engine bay and the strut brace. A small vented section can be seen near the windscreen. The sides of the car feature a set of side hatches and plastic circular mirror casings on the front fenders, as well as long door handles. The greenhouse area is elongated and has chrome trimmings around the windows, no inner pillars between the door and rear-quarter windows, and a large rear hatch. A fuel cap can be seen on the rearmost section of the rear left fender, bearing the Karin emblem. The rear of the car has a small lip on the upper side and a set of circular tail lamps with plastic details around, the outer ones being the amber signals and the inner ones red lamps. The centre of the car is occupied by a plate holder with small markings displaying the car's name and manufacturer. Chrome split bumpers with plastic details can be seen below the lights, as well as two central exhaust tubes below the car. The car features a wood grain interior similar to the one found in the Rapid GT Classic, but the steering wheel features the appropriate Karin logo on it.

The primary colour of the car is applied on the bodywork, while the secondary colour is applied on the door handles. A trim colour is also available for the interior, being applied on part of the dashboard, the door cards and the seats. It uses a set of wheels similar to the "Drag SPL" muscle rims available in Los Santos Customs, albeit bearing the Karin emblem on the central details. These rims can also support a dedicated colour, although only examples generated in Content Creator or seen in the mission Repo - Do You Even Lift? May have one.

The acceleration and top speed are below average for its class, even when improved with upgrades. However, the vehicle handles great, and is capable of making tight turns and maintaining powerslides with minimal effort. This makes it a great vehicle for beginner drivers. In addition, the suspension travel helps it traverse rough roads without loss of control. Power is delivered to the rear wheels, although the strong grip means the vehicle has little risk of spinning out from high-torque, even off-road.

The car is powered by a twin-cam inline-6 engine appearing to use small air filters on the intake manifold. It is coupled to a 5-speed gearbox in an FR layout. The engine sound is similar to the Stinger and Stinger GT, sharing the distinctive high-revving tone. 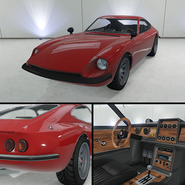 The 190z on Legendary Motorsport.

The 190z on the updated Rockstar Games Social Club.

The 190z in the cinematic preview on Rockstar Games Social Club. 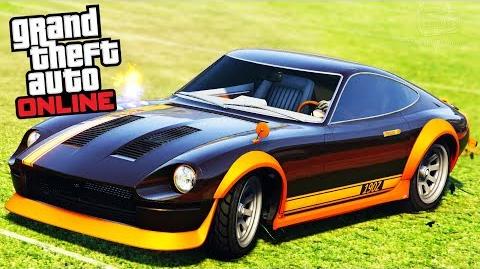