In-game time
Not to be confused with Blog This!....
“Show our friend the sights, L. I'll take the controls”
— Gay Tony.

...Blog This! is a mission in The Ballad of Gay Tony, given to protagonist Luis Fernando Lopez by Gay Tony. This mission is the second part of the Blog This mission earlier in the game.

Luis and Tony trick The Celebinator to get into a luxurious helicopter that they borrowed from Yusuf Amir in order to intimidate him for trash-talking Tony's clubs on his blog. They take him high above the Statue of Happiness in Yusuf's helicopter and, after a few punches or slaps, Luis throws the blogger out to scare him, after which Tony orders Luis to go after him. Luis then jumps out of the helicopter after the blogger, catching him in mid-air and utilizing a parachute to glide with him safely onto land. The blogger limps off, adequately debased and having soiled himself, and is never seen again by Luis.

Once the player arrives at the helicopter, they must get in and fly towards the pink marker. There are pink rings to fly through. Once Luis gets high enough, Tony will take the controls. The player must follow the onscreen instructions to slap and punch the blogger and, when ready, throw him from the chopper. Luis will automatically dive after him on orders from Tony, and if Luis lets him die, the mission fails. The player must aim towards the blogger and dive quickly to catch him. Once the player has him, they must deploy the parachute to safely land on Happiness Island.

Get to the chopper.

Luis arrives at the helipad.

Fly the chopper towards Happiness Island, as high as possible.

Luis is ordered to show The Celebinator the city's sights.

The Celebinator claims that he had already seen everything in the city.

But it's not that kind of sighting. "Intimidate the Celebinator."

Luis throws the Celebinator out of the chopper.

Luis then jumps out of the chopper to rescue him.

Land safely on the ground.

The Celebinator has defecated himself. 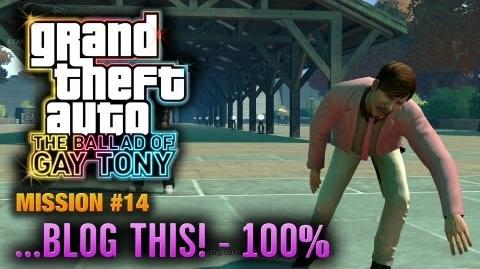 After intimidating the blogger, he will write a puff article for Maisonette 9, Hercules, and their owners, followed by a slam article on the Statue of Happiness. Luis will be given a cash reward for completing the mission, and Tony's next mission will open up. After this mission, Ray Bulgarin will call you and tells you to come to his house for work.