Übermacht (German for 'Predominance' or 'Overpower') (BAWSAQ: UMA) is a German automotive and heavy construction equipment company featured in the HD Universe of Grand Theft Auto. It is likely a parody of the German automobiles manufacturer BMW. The player can buy stocks from them on the Bawsaq.com website in GTA V.

The term Übermacht is German for "supremacy" or "superior", likely a jab at real-life BMW owners having a feeling of superiority over the other marques when driving. An Oracle ad parodying BMW's ad style is seen on billboards around Liberty City, including one at Star Junction.

Übermacht is heavily influnced by the German automaker BMW, which most Übermacht vehicles take primary influence from (except for the Revolter, which is based on a Cadillac vehicle). The vehicles also lack the iconic "kidney grille" that BMW is very known for.

Like BMW, Übermacht has their own performance division called; Sentinel Tuning Division, which is based on BMW M and Subaru Technica International.

Übermacht has had a variety of different logos that have changed through time in the HD Universe of Grand Theft Auto. 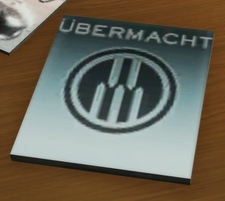 A crane at the construction site on Calais Ave, Little Seoul which is manufactured by Übermacht.

Übermacht's logo seen on the bottom of a crane in RON Alternates Wind Farm.

Base of a crane in West Vinewood with an Ubermacht logo.

A Zion Classic with a Ubermacht livery.
Advertising

Advertisement for the Oracle XS, commonly seen on billboards in Liberty City.

Übermacht billboard advertising the Zion and paroding the rival Obey.

Variant from the same billboard, with graffiti depicting a Drive-By Shooting.

Advertisement for the Sentinel XS in GTA V. 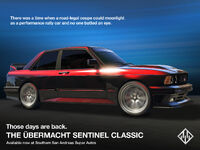