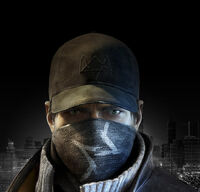 Hey there ! I see you. You're currently visiting my talk page. If you have to tell me something leave me a message and I'll answer you in 8 hours max. I am a patroller here so I can deal with most minor issues such as warning a user, etc (feel free to ask me to vote if you have an active Request for Promotion). If you're new here please follow these rules.

From what I understand, he can keep the content there as long as he points out that the content was taken from our wiki, via a 'Source' or 'Refs' sections.

Yeah, I talked to monkeypolice188 on 1 October before I left and gave him some help setting up those pages. I was going to take a look soon and see how much he managed to do by himself while I was away and touch them up a bit if needed.

As far as "running for" patroller, that would take up the 27th and 28th hour of every day for me. I'd like to keep those for actually playing GTA :) Seriously though, I have a day job and don't really have the time to have an official role on a wiki. I'm happy being a contributor and undo and/or report is all I need. Smurfynz (talk) 09:27, October 12, 2014 (UTC)

Yes, I've noticed it and blocked him for one week for edit warring. Please don't edit war with other users, however. If they continue to undo your edits and refuse to answer, then inform an admin, such as myself (and like you did, eventually. :P) -- iLan (XD • Edits ) 10:07, October 12, 2014 (UTC)

Man I'm so sick and tired of him. If he creates an account copying your info, let me know. He's got to be stopped. He messaged me with more crap on the Midnight Club Wiki, with the final message saying he hates me and all. This dude needs help bad. If I knew him, I'd remove all computers from his house.

I guess he will never learn, but this time, don't answer or give him attention

Why did you take it away on the trivia section? I see plenty of specualtion and thoughts like that all over this wiki. Please explain how it is wrong to put specualtion in the TRIVIA section down even when I have evidence to support that. Mortsnarg (talk) 16:20, October 12, 2014 (UTC)

Hi, the recent userbox you added to my page for me is brilliant, thanks, but i have some more info to add to it. I have made a list called 'Favorites' which contains the things i want in it, if you could do that, thanks again!Monkeypolice188 (talk) 18:21, October 12, 2014 (UTC)

It's not likely that Andreas is the agent from V, he was likely another one of Liz's thugs, and that he took Jorge's job, or that he is Jorge, and it's a developer oversight. He's also a rat, not an undercover agent, also it's usuallty cops that go undercover, not agents. I removed the trivia fact and the merge template, until it's confirmed by an admin or higher. If your theory is correct, then the page can be merged, but if it's wrong it will stay the same. Leo68 (talk) 20:03, October 12, 2014 (UTC)

I'm going to stay out of this because last time I settled a discussion the user threatened me and said he would have me banned, and I can't be bothered with that again. I've spoken to Illan and I've asked him to settle it. Leo68 (talk) 20:12, October 12, 2014 (UTC)

I like it! It just needs like a little warning sign image and it'd be perfect. Just let Cloudkit know because he always uses the Warning template first.

I really don't know how to make an archive sadly. Cloudkit did it for me but never really taught me.

Hey man, I really appreciate your efforts at making a template for Vandalism. It's actually pretty good. It may have needed an adjustment or two, but I think it's perfect for any vandals on this wiki. Carl Johnson Jr. (talk) 21:24, October 12, 2014 (UTC)

Ah, one of the new members of the moderator/patroller team :) Not really quite back in bi'ness, though. I'm only editing on my Galaxy Tab 3 because I do not have Internet enabled in my home and there are times where my tablet won't let me edit. Because of that, I check back on the wiki every now and then. Probably by this week or the next, I should be getting my Internet turned backed on then I will be back in bi'ness lol.

Too late pal! I done reported him to Wikia just a few minutes ago! Hopefully they come for him! Also I do want my talk page archived. Thanks!

I think I saw you add a template that said Archive. Am I correct?

Alright it's on the Lago Zancudo talk page. Leave your opinion please! :)

Yea I saw the message. He's also left some on the Midnight Club Wiki. Like after causing disputes on the wiki for about a month or more you want rollback rights? He's really insane.

I won't answer him but if he keeps messaging me, I'm gonna have to block him.

HHAHAHAHA You just missed he coming back to The Last of Us wiki, he said "ooh i'm sorry, my parents would be ashamed bla bla bla" and I didn't even answer, this time i'll pretend i'm blind or stupid and I don't know how to answer people xD

Holy... hahahaa xD if I can't be a patroller myself, imagine those users, Trevor is just a killer version of him, while Catalina is his female version

^^^^ Dead XD. Catalina is so funny. Anyway, RainingPain I just wanted to let you know that I officially got that job. Sean doesn't believe it, but even people with problems can change themselves.

If I can remember, Wikia staff take weeks to do something, but at least it was reported to them.

Yea I see it too. That's really weird. Let's see if they show back up. If not, this is going straight to Ilan xd or The Tom.

User of the Month

I saw your user of the month idea on Ilan's page. It seems like a great idea, if we set up the page and have monthly votes where the users suggest their favourite user, then the user with the most votes wins. If we create a template that says something like;

Please stop being rude to me and everyone. Everyone is sick and tired of you reverting our edits and complaining all the time, come on man that is not cool thats being a fool. So I am giving you this warning to stop adding tags to Wanted level in GTA V, you a really bad patroller. Look at the rules of vandalism and if you keep giving me warnings or putting back the tag, I will need to contact a true admin or patroller (not you) to deal with you and your edits! your really pissing me off! im already mad >:(. U MAD OR NAH >:(.

Sorry Raining Pain that was meant for 123johnpaul im sorry :(

Sorry Raining Pain that was meant for 123johnpaul im sorry :(

Retrieved from "https://gta.fandom.com/wiki/User_talk:RainingPain17?oldid=701982"
Community content is available under CC-BY-SA unless otherwise noted.