• ­Is Bulky
• ­No Heavy Brake Animation

"Is it a monster truck or only a monster? Who cares - crush those labels under your 37-inch wheels. The Karin Everon is a street-legal pickup truck with enough torque to pull down City Hall if they were to ever say otherwise. Bigger than a Liberty City apartment and less fuel efficient than an oil tanker, it's a two-ton bumper sticker saying "I don't give a fuck". Don't sit in traffic, drive over it."
―Southern San Andreas Super Autos description.

The Karin Everon (Japanese: エヴァロン) is a four-door all-terrain truck featured in Grand Theft Auto Online as part of the The Diamond Casino Heist update. 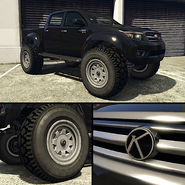 The Everon on Rockstar Games Social Club.
Add a photo to this gallery

Retrieved from "https://gta.fandom.com/wiki/Everon?oldid=1198214"
Community content is available under CC-BY-SA unless otherwise noted.