Grandmaster Flash and The Furious Five

People pissing on the stairs, you know they just don't care

Got no money to move out, I guess I got no choice

Rats in the front room, roaches in the back

Junkies in the alley with the baseball bat

I tried to get away, but I couldn't get far

Cause a man with a tow-truck repossessed my car

Don't push me cause I'm close to the edge

I'm trying not to lose my head, ah huh-huh-huh

Standing on the front stoop, hangin' out the window

Watching all the cars go by, roaring as the breezes blow

Crazy lady livin' in a bag

Eating out of garbage pails, used to be a fag-hag

Said she danced the tango, skipped the light fandango

The Zircon Princess seemed to lost her senses

Down at the peepshow, watching all the creeps

So she can tell the stories to the girls back home

She went to the city and got social security

She had to get a pimp, she couldn't make it on her own

My brother's doing bad on my mother's TV

She says: "You watch it too much, it's just not healthy!"

"All My Children" in the daytime, "Dallas" at night

Can't even see the game or the Sugar Ray fight

The bill collectors they ring my phone

And scare my wife when I'm not home

Got a bum education, double-digit inflation

I can't take the train to the job, there's a strike at the station

Neon King Kong standin' on my back

Can't stop to turn around, broke my sacrophiliac

Sometimes I think I'm going insane, I swear I might hijack a plane

My son said: "Daddy I don't wonna go to school

Cause the teacher's a jerk!", he must think I'm a fool

And all the kids smoke reefer, I think it'd be cheaper

If I just got a job, learned to be a street sweeper

I'll dance to the beat, shuffle my feet

Wear a shirt and tie and run with the creeps

Cause it's all about money, ain't a damn thing funny

They pushed that girl in front of the train

Took her to the doctor, sewed her arm on again

Stabbed that man right in his heart

Gave him a transplant for a brand new start

I can't walk through the park, cause it's crazy after dark

Keep my hand on my gun, cause they got me on the run

I feel like a outlaw, broke my last glass jar

Hear them say: "You want some more livin' on a seesaw?"

A child is born with no state of mind

Blind to the ways of mankind

God is smiling on you but he's frowning too

Because only God knows what you'll go through

And your eyes will sing a song of deep hate

The places you're playin', where you stay

And you wanna grow up to be just like them, huh,

But then you wind up dropping out of high school

Now you're unemployed, all non-void

Got sent up for a eight year bid

Now your manhood is took and you're a may tag

Spend the next two years as a undercover fag

Till one day you was found hung dead in a cell

It was plain to see that your life was lost

You was cold and your body swung back and forth

But now your eyes sing the sad, sad song

Of how you lived so fast and died so young

Don't push me 'cause I'm close to the edge

I'm trying not to lose my head

Yo Mell, you see that girl there?

Yo, what's up Money?

Yo, where's Cooly an Raheim?

They is downstairs coooling out

So what's up for tonight y'all?

We could go down to Phoenix

We could go check out "Junebug" man

Hey yo, you know that girl Betty?

Come on, come all man

That's what I heard man

What's this happening, what's this?

Don't nobody move or nothin'

Y'all know what this is (What's happend?)

Oh man, we're (Right in there) Grandmaster Flash and the Furious Five

What is that, a gang?

I don't wanna hear your mouth

Officer, officer, what is the problem? 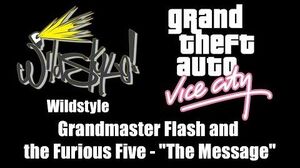