And I learned all the things that a man should know
From a woman not approved of, I suppose
She died knowing someone really loved her
From life's bramble bush 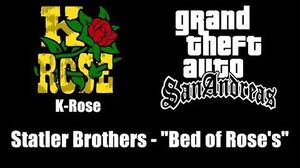