• ­Defend the targets against [Organization].

• ­Defend the last target against [Organization].

Reaching Rank 1.
Playing as a VIP/CEO

"Assassinate all targets before the time runs out."
―Work description.

Headhunter is CEO/VIP Work featured in Grand Theft Auto Online added as part of the Further Adventures in Finance and Felony update.

"One of our clients needs his relationship with some former associates brought to a quick and final conclusion. We're anticipating resistance and police interference down the line."
―SecuroServ text message.

Targets will either be stationary or moving in an armored vehicle. They will be heavily protected with bodyguards, who are equipped with heavy fire-power weaponry and armor. The VIP wears a suit and equips less armor, as well as a handgun. Mobile targets can be the driver or the passenger, and can be found in Armored Baller LEs, Armored Cognoscenti 55s or Armored Cognoscentis. The vehicles and targets are much more durable than in regular gameplay.

"Headhunter has started. Protect the targets

from the attacking Organization to earn cash and RP."

All other players and organizations in the lobby are alerted once headhunter has started and are tasked with protecting the targets marked on the map with blue figures while the enemy organization members are marked with crosshairs. Defenders can work with the target's bodyguards and/or police to defend them (also, they cannot be harmed with friendly fire like explosions). Players will earn cash and RP if they can successfully protect at least one surviving target from the enemy organization once time has run out. 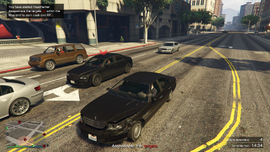 A mobile target in a Cognoscenti 55 (Armored). 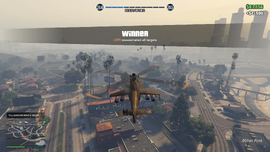 Winner.
Add a photo to this gallery

Retrieved from "https://gta.fandom.com/wiki/Headhunter?oldid=1044468"
Community content is available under CC-BY-SA unless otherwise noted.